I’ve been taking the Coursera course Fundamentals of Online Education for the last week. I nearly said fortnight because it seems like longer and it seems like a lot has happened yet at the same time nothing has happened.  The course was supposed to last 6 weeks but today (now yesterday), without any prior warning, the plug was pulled and the course unceremoniously closed.  As a number of people on Twitter said, “Wow! Just wow!”.  It’s difficult to know what any of the supposed 41000 enrollees are thinking because the site is shut. No one has anywhere to discuss or comment on their feelings or thoughts about the closure. Well we have e.g. our blogs, Twitter, FaceBook, but we are disconnected from each other. No community had developed in the week that the course was open and even in FaceBook, there was little widespread engagement.

Why did this happen? How could a course offered by a company that only offers courses to cohorts of many thousands allow this course to get through their quality control? (I’m making an assumption that there is a quality control process and that Coursera turn their experience gained over the last year or so to helping new courses get off on the right foot.  I’m not sure whether it is more generous to think that they have failed in quality control or that they didn’t fail because they omitted it altogether.)

The course was supposed to teach the Fundamentals of Online Education and I think that it failed to do that in at least 3 ways; the course design, the pedagogical approach, and the materials used.  It’s difficult to separate these out so I’ll describe the sequence of events.

When the course opened, I received a welcome email from the teacher which was a reasonable start although I would suggest that an email perhaps a week before the start, priming people would be better.  The letter uses teacher-centric language “Thank you for taking my class!” which sets her as the expert and doesn’t give learners a stake in making sure the course works and problems are overcome.  She also notes that the course will be a research site although we are free not to participate if we don’t want to.  Before I had even entered the site I felt distanced from the course, a potential little guinea pig in someone else’s plan.

The letter stated that the course would be collaborative in nature and so we would need to join a group. Instructions were provided in a video in the course.  First thing I do is scan about the course, get a feel for what is there, how it’s organised, what it wants me to do. The design should lead me through this.  There are links to Week 1 and Week 2.  The Week 1 link returned the following message:

Not a great start. Week 1 is where the detailed instructions for the ‘Join A Group’ spreadsheet are. Week 1 is the start of the course. Week 1 is meant to welcome us and make sure that we can all access the technology.  When I look in the forums it is clear that this is a widespread issue, not something local to my set up.  Getting the start right is not something which we’ve just realised is important. Gilly Salmon wrote about this nearly last century and this is stage 1.

So let’s look at joining a group. The course is using a Google spreadsheet for group sign up.  There are no instructions within the spreadsheet but the rows are labelled Group 1, 2, etc and they are 20 columns wide.  Seems the intention is that there will be 20 people in a group. Someone will add a new row and give the group a number which is one more than the group before. When 20 people have added their names to a row then someone creates a new row. When I first looked at it there were about 30 or 40 rows, most full.  The spreadsheet did say that due to high traffic it was only showing list view but I’ve seen that before so no great worries.

Not sure how to decide which group to add myself to (what criteria should I use?) I go off and look around the forums and get something to eat.  When I came back to the spreadsheet, it starts off as Row 1, 1001, 1002, 1003,,,.  Some rows are full some have just one person. Some are not called Group x any more but have names like Group Pacific Timezone, Group 6, Group 6a or Alternative Group xxx and then lots where people had entered their name into the group name field.  Group 29 has some space (somehow – I think because it is showing after 1001-1999)  and I join as the 7th person in the group. 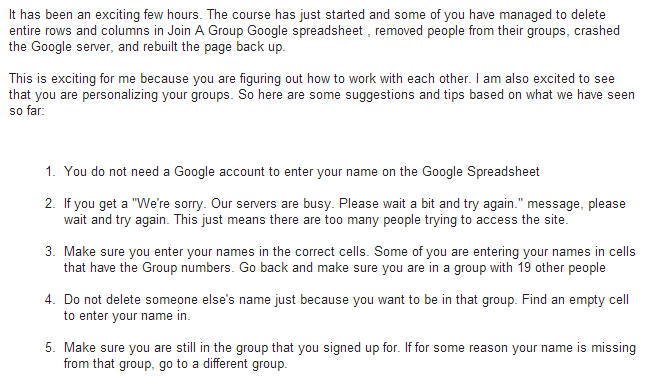 OK, so some problems with up to 41000 people trying to make a concurrent connection to the Google Spreadsheet. Maybe this wasn’t the best way to allocate groups.  My thought at the time was that Google Forms would have coped with some scripting to allocate people to groups based on answers they gave in the form.

There was also a problem with the language in the message.  It’s the bit about “Some of you have…” which suggests that we are to blame. We have been naughty learners and we have broken the spreadsheet and crashed Google. (Really?). Wow!

After work I checked the spreadsheet and found that I had become one of the disappeared.  Also another announcement had also been made countering point 5 from the message above:

So I’m still in Group 29 even though my name’s not there and there are about 26 people listed. So I introduced myself and became a 29er for the week.  Thirteen hours later, the following announcement was posted:

Wow! In less than 24 hours we’ve had 3 messages with different info about forming groups.  And how will this option be any different?  Having a look at this forum, Group A, started by the teacher, had 166 responses! The best group was called “Big confusion about groups” and had become full of people saying that they were confused about the groups and they had better join this one.

All this is just trying to get people into groups so they could collaborate.  By Day 4 the disarray over people finding groups had become so apparent that the assignment deadlines had been extended:

Note the language again. The confusion and chaos was caused by Google, not by the design.

On day 5 this message appeared:

Hindsight may be a great thing but in the application and planning of an online course, foresight is too and perhaps allocating everyone from the start would have been a more effective solution.

There is another point to make here about that email above. Actually getting people into groups wasn’t going to solve the issue of what to do when you were there.  There was no instruction on collaborating, nor any indication from the assignment instructions as to why you would collaborate.  The assignments asked to post our reaction to a set of readings into our group forum and then to copy and paste that reaction into the assignment tool. Nothing about working with others, refining and reflecting on your post, collaboration. It’s not surprising then that people were asking why we were going through the pain of group creation when we weren’t expected to work together in the groups.  Malcolm Knowles and andragogy were mentioned in one of the video lectures yet there was no attempt to tell us why we were undertaking these activities, a key point in supporting adult motivation.

Going back to the videos, they appeared on Day 2 with a message apologising for the technical glitch.  I started to watch one.  Well I started and watched about 13 seconds. Then it stopped for 2 minutes. Then it started. Then it stopped. After an hour I had seen about 10 minutes of video.  The forums had posts from people saying that when they had tried to download them so they could actually watch, the videos were up to 800Mb in size. People were complaining about the monetary cost in less well connected areas. $12 a video is a figure I remember.  This seemed really strange for a course that was meant to be online learning 101 but it left users in the situation where they couldn’t access the learning because the technology got in the way. Wow!
It turned out there were lower quality (i.e non HD) videos available but there were no links to them from the syllabus.  When I watched those I was amazed. I thought that the instructor had provided subtitles to ensure that they were accessible then I realised that the slides were being read verbatim.

The first video also had a set of Learning Objectives for the course. These were different from the learning objectives listed in the course syllabus.  The videos didn’t align with the readings or lead us to them.  There were factual inaccuracies, for instance concerning Creative Commons licenses, when it was stated that they allowed you to use material for non-commercial purposes.  Actually the whole copyright section seemed designed to tell you what you weren’t allowed to do rather than how, as an online educator, you could find materials openly licensed for reuse.

So the modelling of using video in class seemed to be very, very poor. Perhaps it was going to get better but we will probably never know.

After 5 or 6 days, people were withdrawing from the course and offering erudite reasons for doing so:

And a student responded to that with: 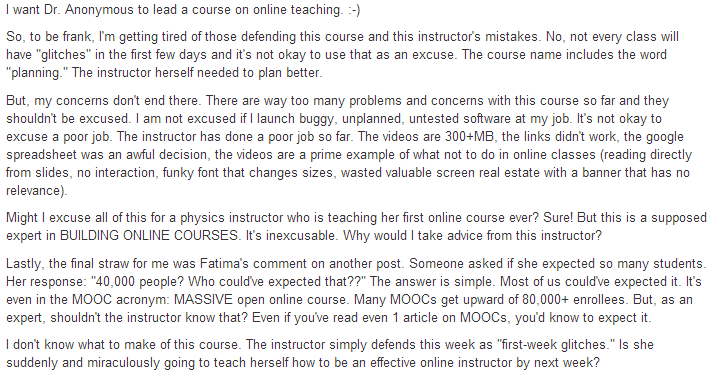 In fact there had been a raft of excellent suggestions during the week as to how the course could be improved and technically made to work. (Debbie Morrison posted some on her blog.)

The morning of Day 7 arrived and an overnight message stated that week 2 was going to be delayed while week 1 was sorted.

It might have been interesting to have explored “what technology cannot do and the reaction of people when technology does fail”. Again the fault is external.  A similar example is in the middle paragraph where it seems that learners were not educated enough to understand what was required of them, even those those requirements (“hopes”) were not stated, explained, or modelled anywhere.

I did some work until midday and then went out for coffee. When I came back at 2pm the following was in my inbox:

On going to the course page, this was the message:

Looking on Facebook,  some people had been in the middle of working in forums when the site shut. No warning, nothing. Wow!

Trainwreck by found_drama, courtesy of a Creative Commons BY-NC-SA license

I could go on but there is little point. The pedagogy was instructivist, social aspects of learning were left to serendipity, the course used technological approaches suited to small cohort situations but that could not scale to the massiveness of a mooc, the learning objectives were poorly defined, and the pedagogy and teaching did not align with the intended outcomes or the assessments. This was a train wreck of a course and it’s not surprising that it crashed and burned. It is really surprising that Coursera are not providing quality control or developmental support that would have picked up these issues.

As people said to me on Twitter, Wow! Just Wow!

32 Responses to 24 Hours – A long time in online learning